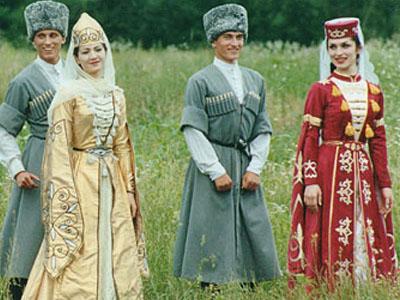 These people are considered one of the oldest races in the world. They are the origin of the Arian Race (Indo-European), or the Caucasian Race. But because of continuous war on them for centuries the people now are scattered in Diaspora residing in more than 50 countries.

Circassian music refers to music of the Circassians (Adyghes, Cherkess, and Kabardays), people from Northern Caucasus, Russia. Their music demonstrates their traditions and habits.

Circassian music is characterized by certain instruments, including:

Pshina, an accordion which is played in a specific way to produce Circassian tunes
Pxachach, 2 sets of "wood blocks", each set containing about six pieces of wood held by hand; when a player strikes them together they produce a pure sound of wood to indicate the beat rhythm of the song.
Baraban, a drum known as 'Dhol'; in Adyghe it is called "Shontrip".
Pkhetaw, made from wood looks like a small table and it is used for hitting it with sticks for tempo.
Apa-pshina, a three string lute.
Qamlapsh, the Circassian flute.
Shik'epshine (Adyghe: ШыкIэпшынэ), a Circassian stringed instrument.

In Circassian music, there are several dances that are performed differently. I am including a video of each dance from youtube so you guys have a clue.

Kafa is a piece with (4:4) time signature, and usually this piece demonstrates the relationship between the Challa (male) and the Pshasha (female), this relationship which is built out of love, cooperation and strength. Usually 'Kafa' is the main piece to be played in a 'Djagu' (a Circassian wedding or any Circassian gathering) and there are more than 100 kafas written by different Circassian artists.

Noticeably, the Kafa is the easiest form of Circassian dance, anyone can do it based on the rhythm and the number of steps that takes.

Click below for the Video of Kafa: This is from Jerash Festival in Jordan 1993 by Al Jeel Dance Ensemble from Jordan
www.youtube.com . . .


Wuig is a piece with (8:4) time signature, and usually this piece is played before Challas are going to war, but nowadays it is played at the end of the Djagu and usually it follows this rhythm each eight time intervals a new musical phrase is introduced, and this piece may be repeated several times since more than ten different Wuigs are available.

This is sort of an easy dance step as well. however this type of dance is used in weddings as well as gatherings.

The video below is from Nalmes Dance Ensamble from Nalchik - Kabardina Balkaria Republic in Russia
www.youtube.com . . .

Tleperush is a dance which originates from the Black Sea coastal area. It is a piece with (4:4) time signature, and the word "Tleperush" means "leg kick" and usually this piece is faster than Kafa and Widj, almost equal in tempo to known "Lezginka" but different in style and follows this rhythm (1&2..3&4) and this rhythm is produced by Pshina and Pxachach and Pkhetaw (a wood hitting instrument for tempo). Abkhazians have this dance too, and they call it "Apsua Koshara"
This is one of the fastest dances and hard, see video below
www.youtube.com . . .

Zefauk means "approach to each other". It is a piece with (4:4) time signature, and very similar to Kafa; the word "Zefauk" means (forward and backward) and it defines how it is danced by going 4 steps forward and another four backward exactly as the Kafa but with different musical taste.
This dance is also easy to learn as Kafa, see video below
www.youtube.com . . .

Shishan means "horse behaving". The dance is a fast piece with (4:4) time signature; this particular piece is played differently by pulling the Bellows of the Pshina in and out rapidly to create an Off Beat Rhythm which produces a Rhythm two times faster than its time signature, and the word shishan is a Circassian word and it is not linked to Chechen. Fast paste is always hard to learn, see video from Jerash festival 2004, Al Jeel Dance Ensamble
www.youtube.com . . .

Tlepechas is a fast dance and it is an improvisation dance it is considered to be one of the ancient dance of the Circassians, "Tlepechas" means "stick toes in the ground" the dance is based on the Nart sagas legends that used to dance on their toes.
This one of the hardest dances see video below by Nalmes
www.youtube.com . . .

Zighalat means "be the top". The dance is very energetic and fast, and it considered to be the fastest dance in the Caucasus. It is danced in pairs, in which the male dances fast and strong to show his skills, and the woman dances gentle but moves fast. one of the hardest dances see video from Nalmes
www.youtube.com . . .

Hakulash means "lame man move". At the beginning it was a joke and comedy dance to make the viewers laugh, but with time it became part of the Circassian repertoire; its leg moves look like lame moves but the dance is a fast dance.see video www.youtube.com . . .

Yislamey was named after the man who first danced it, "Islam". "Yislamey" means belong to Islam. A young man called Islam danced by imitating the moves of an eagle he saw flying in the sky, and the female who danced with him, understood his intention and danced with him as he did. There are two kinds of "Yislamey", this one is the "Bjedough Yislamey". see video www.youtube.com . . .

Qamachas is the dagger dance. The dancer shows his skill with the "Qama", the Circassian dagger, it is a fast dance and it is a competition dance between men, and sometimes it is danced as solo. One of the hardest and toughest dances see video www.youtube.com . . .

Apsni Apsua is the famous Abkhaz dance. Abkhazians are considered part of the Circassians[citation needed]; they are very close in blood, language, culture, traditions with the Adyghe, in time Adyghe adopted their brothers' and neighbors' dance. see video
www.youtube.com . . .

Hope this brings value to other folk groups

re: Circassian Folk Dance
By schuhplattler

Get in touch with the Duquesne University Tamburitzans. They might want to perform a Circassian dance or two.

Here is one of their entire performances (over two hours): www.youtube.com . . . View it right away because they might want to remove it for copyright reasons.

The Georgian number at 1:31 should give you an idea what they could do with a Circassian dance.

re: Circassian Folk Dance
By umbrellaman

Get in touch with the Duquesne University Tamburitzans. They might want to perform a Circassian dance or two.

Here is one of their entire performances (over two hours): www.youtube.com . . . View it right away because they might want to remove it for copyright reasons.

The Georgian number at 1:31 should give you an idea what they could do with a Circassian dance.


Thanks for the reply, and I thank your contribution, I saw the piece of the Georgians, this dance is shared by all the Caucasians called Lezginka, fast dance and the men show their strength in it,

Noticed also that the University is in the states, they have a dance ensamble in the US Jersey State, defiantly we can arrange something

re: Circassian Folk Dance
By umbrellaman

I noticed that the link on this part is not right, I'll ask the mods to correct it, meanwhile I am posting it below

Qamachas is the dagger dance. The dancer shows his skill with the "Qama", the Circassian dagger, it is a fast dance and it is a competition dance between men, and sometimes it is danced as solo. One of the hardest and toughest dances see video

re: Circassian Folk Dance
By schuhplattler