This one is my favorite!

Does Carlos Acosta count??? He's definatly not a ballerina but oh well!

At the Bolshoi as Spartacus

She is not black

Zoe Saldana was a ballerina before becoming an actress. She is the one on the left.

The one below is Kitty Phetla and Yolande Olckers. Isn't it beautiful? 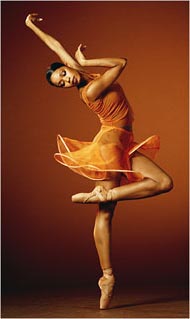 re: black ballerinas
By irenie_poo
On 12/26/2007 19:13:03
I love Tanya Howard! Unfortunatley I couldn't find any photos of her dancing that I was able to upload but here is her head shot!

By lack of ballerina's, some men.

re: black ballerinas
By Britain
On 02/06/2008 18:54:24
I don't know how to post photos. But there is also Virgina Johnson from the Ballet Theatre of Harlem. I have a DVD of her dancing the role of the accused in Fall River Legend. She's truly a fantastic Lizzie Borden!! The DVD is older, I think she's retired now, I'm not completely sure.
re: black ballerinas
By GenBean
On 03/14/2008 09:28:25
I was websearchin and found these: Ebony (I dont know her last name)She used to dance for Complexions Contemporary Ballet

Unknown but I love this pic

The Lovely Tai Jimenez, She used to dance for the Boston Ballet.

Unkwnown but I love her flexibility

Marion Cuyjet. Now I know she looks white but actually she was mixed. She helped pave the way for many black ballet dancers.

Some students at the dancer theater of Harlem.

Students from a school in South Africa

Courtney Lavine she's a up and coming ballerina who joined ABT II in January 2008 I think she has a great career in front of her.

Courtney when she was 13